Up to 14th November Miscellanea

This is "On Track" activity of another kind - The Strathspey Railway own the access road to the Engine Shed at Aviemore, it is freely used by non-vehicular members of the public and a complaint had been received about potholes. 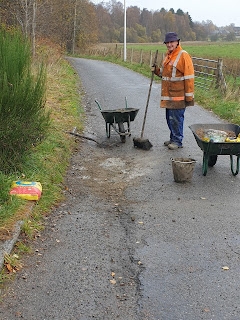 Lead by Mike Tough above, we filled in the deeper holes with railway ballast and brushed over with post-crete cement and sprinkled with water. 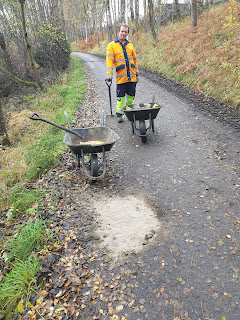 Michael admiring our work, how long the fix lasts, might depend on how often vehicles obey the 10 mph permanent speed restriction!
------------------------------
Although overtime everything weathers and this includes parts of the platforms at Boat of Garten.
Earlier in the year we got some Government money to go towards maintaining our infrastructure - this is being used to hire in again our trusty Stonemason from Aberdeen-shire. 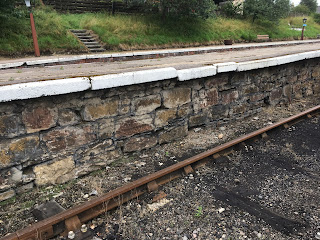 The Dock platform before 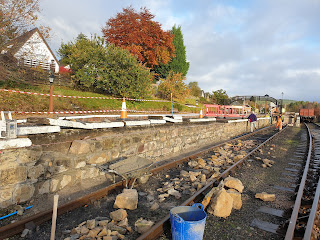 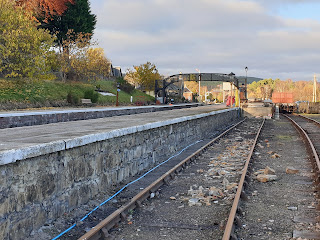 After
surplus masonry may get recycled 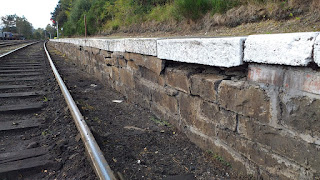 as other areas still require attention.....TBC
-----------------------------
As usual the Strathspey Railway Association AGM clashed with a P'Way work weekend but this year's Diesel Multiple Unit trip took Members to the New P'Way Maintenance Depot a.k.a. "Morley's" at Boat of Garten. 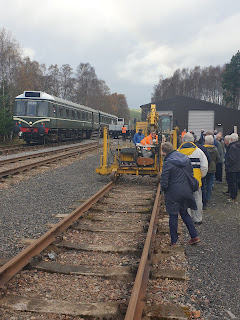 Where Ian guided Members round the various bits of plant and inside the shed itself. After this Georgie had Sam, Bob and Peter possibly tidying the tool van? as the weather turned foul as forecasted.
-----------------------------
Yesterday by chance John had his chainsaw with him, as he and Ian were to construct a sleeper foot crossing, but first Georgie dispatched them to clear the fallen tree that had been reported the day before by a dog walker near the 85 milepost. 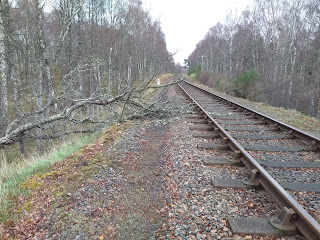 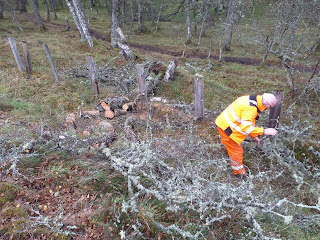 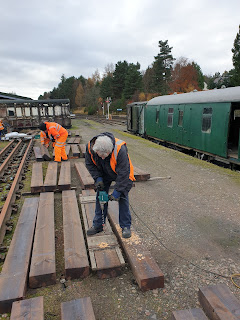 The rest of the squad stayed at Boat - splitting in two - Andrew, Angus, Mike, Martin and myself started by pre-drilling one end of the new sleepers, using a template constructed many years ago by the late Hamish Mackay. 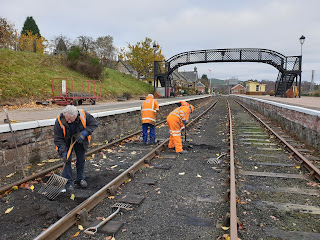 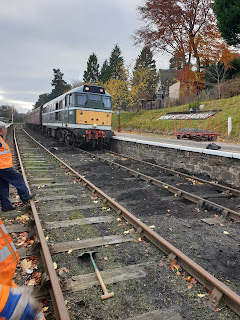 Alas the Diesel Driver Training Train (DDTT?) never stopped in the station to give us a break! - not that there is any ballast only ash and earth but it was hard slow tiring work.
The other squad lead by Georgie - Bob, Kevin and Michael did some measured shovel packing and other technical stuff ! - Kevin must have worked hard as they were let away before darkness.
----------------------------------------
Oh and "Fishermans Crossing" now for the first time ever has a proper sleeper foot crossing! 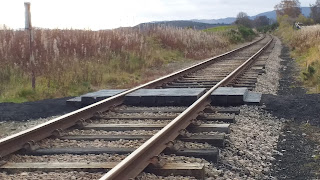 Thanks to all that attended, the Railway is being maintained and even improved.
Posted by Neil at 13:04