Another excellent turnout in what was initially a mild wet day. 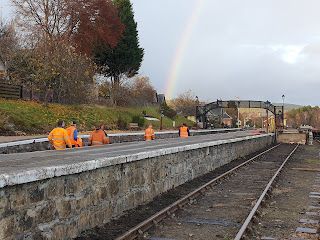 First task, to remove all the excess stonework from the re-building of the Dock Platform facing that was lying in the "four foot" and at the same time bury the blue water pipe that runs between the sleeper ends and the platform (guys heading to main task, rainbow not quite in right place!) 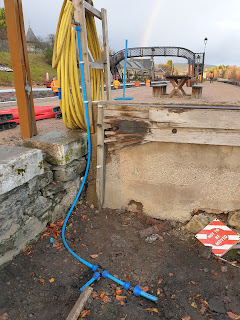 As our skilled Plumber Jim was many miles away on holiday, Mike assisted by Bob & Michael took the opportunity to rectify one of Jim's long standing leaks! - Will await his nod before burying the joint. 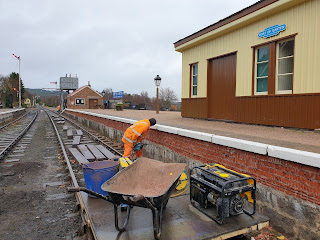 Many years ago Her Majesty's Railway Inspectors (HMRI) informed us that the Up Platform had to be raised to a more acceptable height, this was done by a contractor brickie and the story goes, that the only bricks available were engineering bricks, pretty much ever since they have been spalling, Mike Tough observed recently right back to the "frogs" in places and now our stonemason is slowing down the erosion process by removing the worst of the loose material and 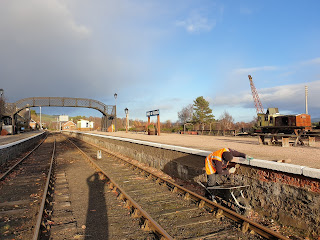 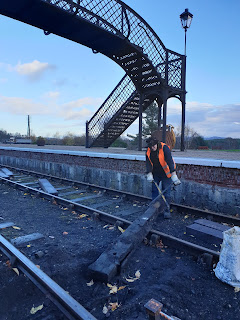 The main task was re-sleepering, by removing the "six foot" chair and jacking up the track sufficiently, the old sleepers can be removed over the rail of the Up line, above Georgie did it too quickly to show how tight it actually is. 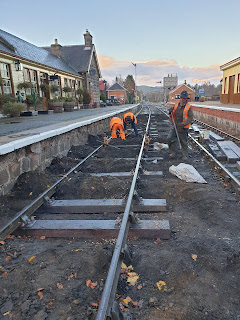 Above new sleepers in, almost ready to pack, once jacks dropped. Note Fergus trying to outdo Georgie in hat department. 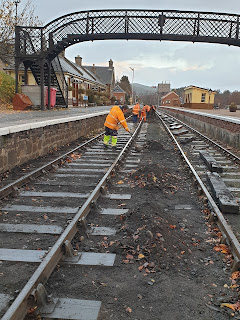 Just a case of filling in, alas too much "ballast" excess deposited in "six foot" to be cleared later, above Michael removing worst of spoil from chairs. In total 17 sleepers changed and weather cleared up but much colder.
Thanks to Martin, Angus, Mike, Bob, Fergus, David and Andrew.
--------------------------------
Mid-Week morning saw 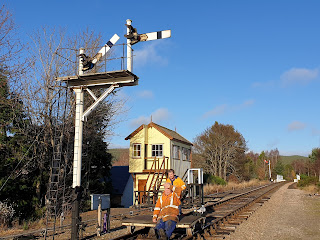 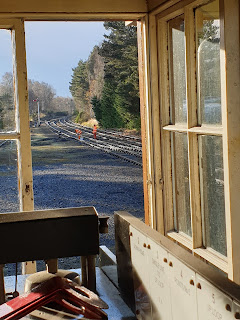 Leaving Angus and Roddy to apply anti-freeze lubricant to the Mainline switches at Boat of Garten, I had the easy job of reversing all the points from the Signal Boxes at the required time. 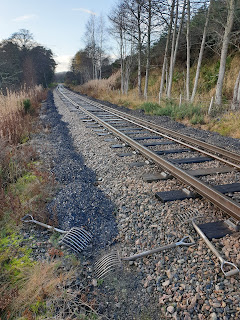 After lunch we headed to the Broomhill end, Angus & Michael "Winterising" the points there, Mike, Roddy and myself levelling spent ash forming a cess, guess from steam locomotive 5025 as it was very light and a pleasure to work with, apart from finding face masks and ear plugs amongst it! As it was getting dark by this time, the end result might not quite be up to Georgie's high standard but we are likely to be at this locus again next year.
Again as ever thanks to all that helped.
Posted by Neil at 21:24